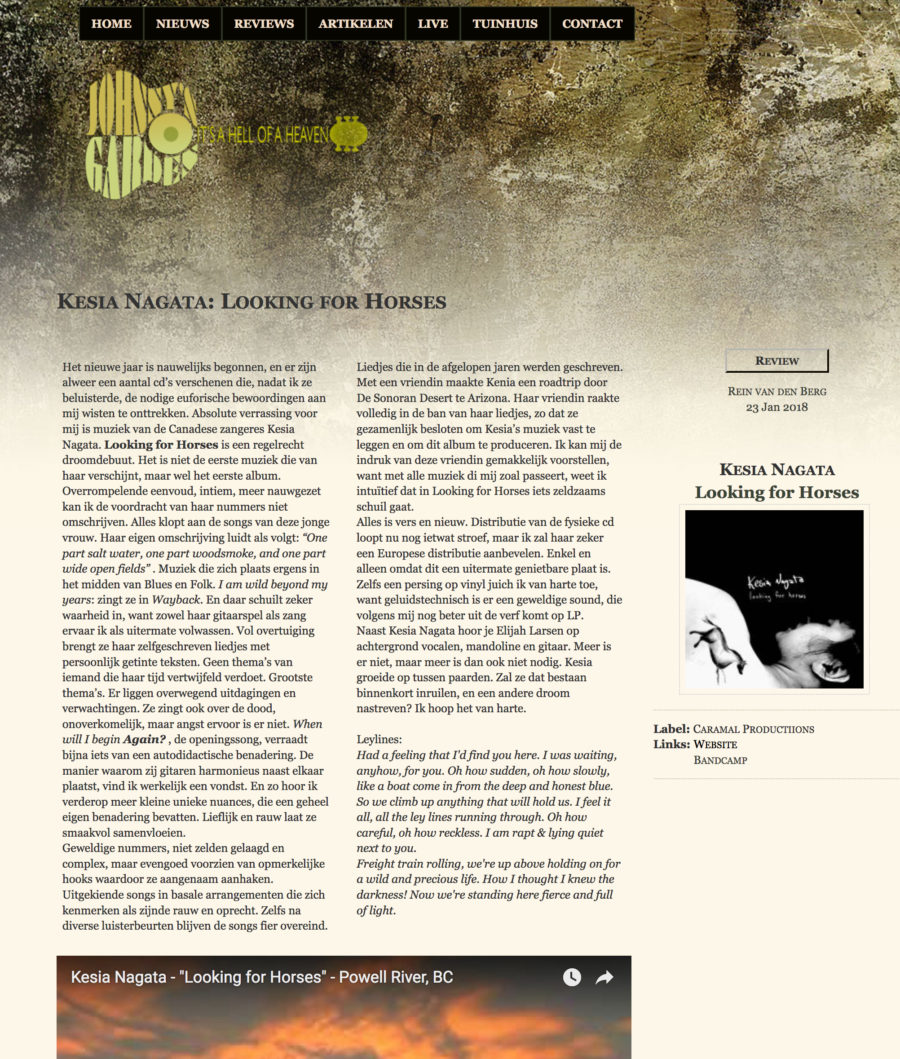 Translation: “The new year has barely begun, and a number of CDs have already appeared that, after I listened to them, managed to extract the necessary euphoric words from me. Absolute surprise for me is music by the Canadian singer Kesia Nagata. Looking for Horses is a true dream debut. It is not the first music that appears from her, but the first album. Surprising simplicity, intimate, I cannot describe more accurately the presentation of her songs. Everything is in line with the songs of this young woman. Her own description is as follows: “One part salt water, one part woodsmoke, and one part wide open fields”. Music that takes place somewhere in the middle of Blues and Folk. I am wild beyond my years: she sings in Wayback. And that is certainly the truth, because I experience both her guitar playing and singing as extremely mature. Full of conviction she brings her self-written songs with personal texts. No themes of someone who despairs her time. Biggest themes: There are mainly challenges and expectations. She also sings about death, insurmountable, but there is no fear of it. When will I begin Again?, the opening song, almost betrays something of a self-taught approach. The way in which she harmoniously juxtaposes guitars, is a real find. And so I hear more small unique nuances, which contain a completely different approach. Sweet and raw, they blend together tastefully.

Great songs, not infrequently layered and complex, but also provided with remarkable hooks that make them pleasant to hook on. Sophisticated songs in basic arrangements that are characterized as raw and sincere. Even after several listens, the songs remain standing proudly.

Songs written in recent years. Kesia made a road trip with a friend from the Sonoran Desert in Arizona. Her friend became completely captivated by her songs, so that they decided together to record Kesia’s music and to produce this album. I can easily imagine the impression of this friend, because with all the music that passes me like that, I intuitively know that something is hidden in Looking for Horses.

Everything is fresh and new. Distribution of the physical CD is still somewhat stiff, but I will definitely recommend it to a European distribution. Just because it is an extremely enjoyable disk. Even a pressing on vinyl I heartily welcome, because sound-wise there is a great sound, which I think is even better on LP. Besides Kesia Nagata you can hear Elijah Larsen on background vocals, mandolin and guitar. There is no more, but more is not necessary. Kesia grew up among horses. Will she soon exchange that existence and pursue a different dream? I really hope so.” – Rein Van Den Berg, Johnny’s Garden 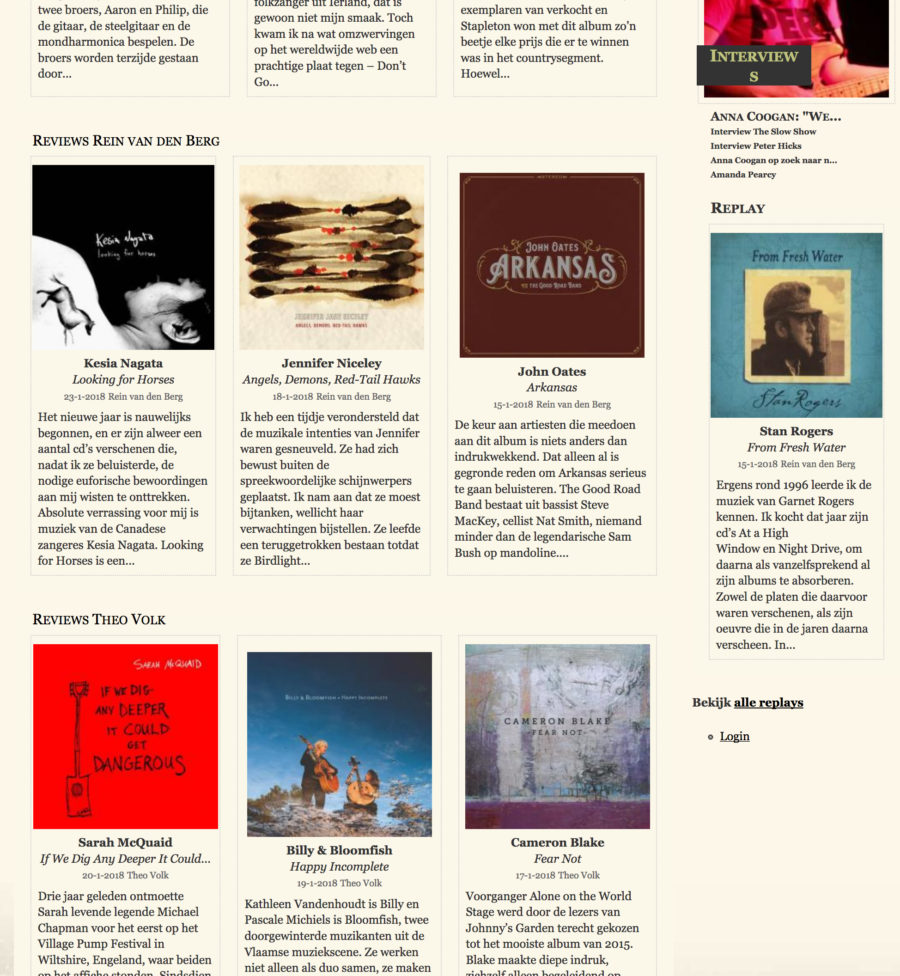 Another review in Dutch, from the blog De krenten uit de pop (English translation below): 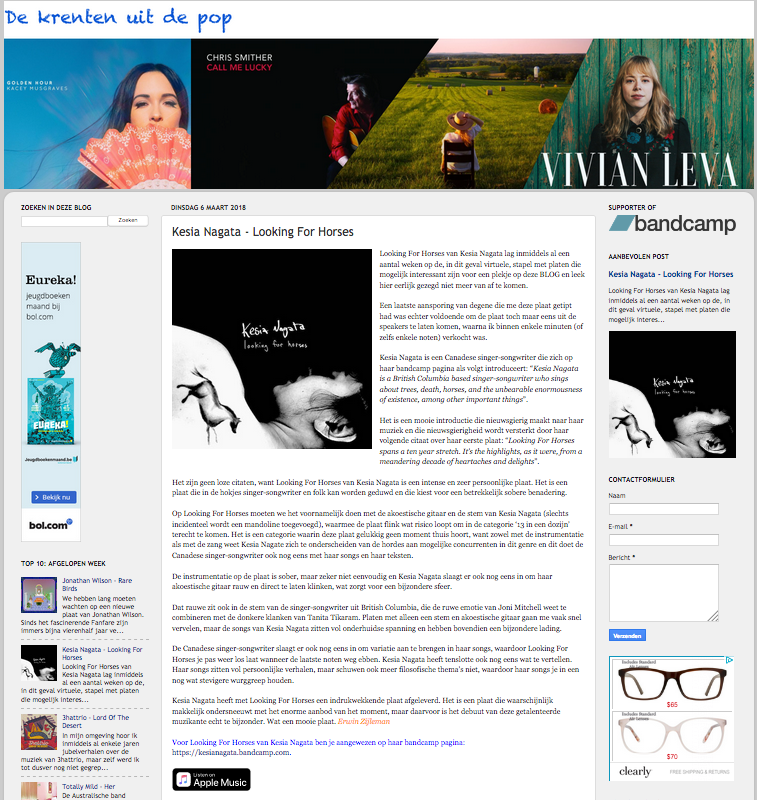 Looking For Horses of Kesia Nagata was already a couple of weeks on the, in this case virtual, pile with records that might be interesting for a spot on this BLOG and seemed to honestly no longer come off.

A last incentive of the person who tipped me on this album was enough to get the record playing out of the speakers, after which I was sold within minutes (or even a few notes).

It is a beautiful introduction that makes her curious about her music and that curiosity is reinforced by her next quote about her first album: “Looking For Horses spans a ten year stretch. It’s the highlights, as it were, from a meandering decade of heartaches and delights.”

They are not empty quotations, because Looking For Horses by Kesia Nagata is an intense and very personal album. It is a record that can be pushed into the booths of singer-songwriter and folk, and that opts for a relatively austere approach.

In Looking For Horses we have to make-do mainly with the acoustic guitar and the voice of Kesia Nagata (only occasionally a mandolin is added), with which the record runs a great risk of ending up in the category ’13 in a dozen ‘. It is a category in which this record fortunately does not belong for a moment, because both with the instrumentation, and with the vocals, Kesia Nagata distinguishes itself from the hordes of possible competitors in this genre and this is what the Canadian singer-songwriter does with her songs and her lyrics.

The instrumentation on the record is sober, but certainly not easy and Kesia Nagata also succeeds in making her acoustic guitar sound raw and direct, which creates a special atmosphere.

That raw is also in the voice of the singer-songwriter from British Columbia, who combines the raw emotion of Joni Mitchell with the dark sounds of Tanita Tikaram. Albums with only one voice and acoustic guitar often get boring quickly, but the songs of Kesia Nagata are full of subcutaneous tension and also have a special charge.

The Canadian singer-songwriter also succeeds in bringing variety to her songs, so that Looking For Horses only lets you go when the last note ebbs away. After all, Kesia Nagata has something to tell. Her songs are full of personal stories, but they do not shy away from more philosophical themes, so her songs keep you in a more stern stranglehold.

Kesia Nagata has delivered an impressive record with Looking For Horses. It is a record that probably easily snows with the enormous selection of the moment, but for that the debut of this talented musician is really too special. What a beautiful album. – Erwin Zijleman, De krenten uit de pop